Remember the caution with which we started discussing light treatment of depression. You should check with your doctor. If you have significant depression, especially if you might have a major depressive disorder, if bad mood is keeping you from your normal activities, or you have any thought of hurting yourself, you should certainly get your doctor’s help. It is nice that self-managed light is sometimes sufficient for the mild problems, but please do not count on bright light alone if your depression is causing serious trouble.

This caution is similar to the caution with other health aids. An average person knows how to get some exercise, but if you have had a heart attack, you would need to discuss exercise with your doctor. An average person knows it is good to skip dessert, but if you have diabetes or a stomach ulcer, you need to discuss a detailed diet with your doctor. Similarly, people might try light for minor problems by themselves, but for serious depression, a doctor’s advice should always be sought.

We used to think about bright light as an alternative to the better-known treatments for depression, especially as an alternative to antidepressant medicines and counseling. That is not my viewpoint anymore. Experience shows that even when light treatment helps, it is often not enough. We realize now that light treatment works very well in combination with the antidepressant drugs. These are drugs like citalopram, amitriptyline, trazadone, and lithium – there are quite a few kinds which are good. In fact, it seems that bright light often works best along with antidepressant drugs. The benefits may multiply each other.

Requiring years of effort, a very carefully-designed randomizing controlled trial was done at psychiatric centers in Canada, comparing light treatment with placebo, with fluoxetine (one of the most popular antidepressants, e.g., Prozac brand), and with the combination of light treatment and fluoxetine.[29]  The patients suffered nonseasonal major depressions. The outcome is summarized in the figure below: 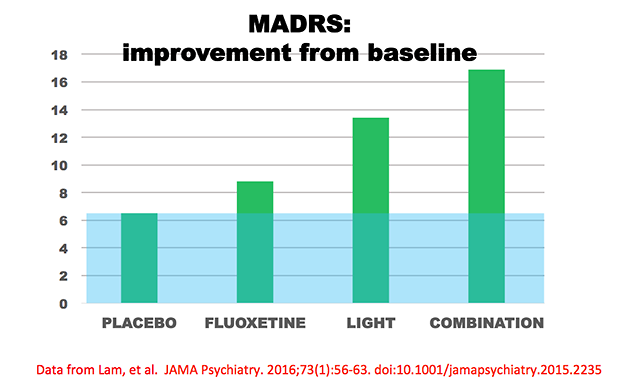 The MADRS is a quantitative estimate of the intensity of a patient’s depression. The figure above shows the amount that patients’ MADRS scores improved (depression scores decreased) from baseline to the end of eight weeks of treatment. The group that received only inactive placeboes improved 6.5 points, a typical combination of “placebo effect” and spontaneous remission in such trials. The blue shading shows this “placebo effect,” and the green bars extending above the blue show the amount the treated groups improved more than those with inactive treatment. The fluoxetine drug group improved 2.3 points more than the placebo group, a typical benefit size in controlled trials of fluoxetine. The light-treated group improved 6.9 points more than placebo, and the group receiving the combination of fluoxetine and light improved 10.4 points more. Note that the combined group experienced somewhat more benefit than the sum of improvements in the fluoxetine-alone and light-alone groups. To summarize this important study, not only was light treatment better than the no-treatment control, light also worked faster than fluoxetine and appeared to help more. Moreover, the combination of light treatment and fluoxetine was better than fluoxetine alone. Although the statistical analysis was not adequate to prove interaction, the combination of light treatment and fluoxetine appeared somewhat better than simple addition of the light-alone benefit plus the fluoxetine-alone benefit; that is, the two treatments appeared possibly synergistic and seemed to help each other. This study as well as other studies of combined treatment argue strongly for combining light treatment with antidepressant drugs.

Counseling is also good for depression. There are new kinds of psychotherapy of depression that really do work. There have now been many studies which prove the benefits of modern psychotherapies of depression. A long time ago, I was trained in the old Freudian methods of treating depression (dream analysis and talk about childhood, for example), and I have to say that I do not believe that those old methods helped depression much. Doctors trained in the newer methods accomplish more. Psychotherapy certainly seems generally safe. In all probability, psychotherapy plus antidepressant drugs works better than the medicines used alone. There have been few good tests of the combinations of bright light and psychotherapy and no tests of combining bright light, medication and psychotherapy that I know of. There is every reason to think that these combinations would be safe and more effective than a single treatment. Indeed, the combination of bright light, antidepressant drugs, and psychotherapy might be the best for many people. I wish there were more results of clinical trials of light benefits to describe, but no treatment in medicine has been tested long-term in every possible combination with other treatments. Talk to your doctor about psychotherapy.

Our first studies of bright light tested only one single hour of bright light to treat hospitalized patients with nonseasonal depressions.[37]  The patients were awakened to receive the light treatment from two hours to one hour before the patient’s usual planned time of awakening, so that these patients experienced one or two hours of wake therapy at the end of the night. We now call getting patients up early “wake therapy,” because to call this helpful treatment “sleep deprivation” gives the wrong impression. Most patients were drug free, but some were taking antidepressants during light treatment. As compared to a control hour of light placebo, which presumably produced the same sleep curtailment, the bright light reduced mood ratings about 12%. As will be explained, a 12% net gain as compared to placebo is similar to benefits achieved by antidepressant medications after weeks of treatment, so it was remarkable that such substantial benefit could be obtained with one single hour of bright light.

In an extension of our initial studies, 25 drug-free patients were treated with bright light each day for one week, compared to 26 patients treated with a dim-light placebo.[38]  Depression ratings were 18% lower after bright light than after placebo, a benefit which was statistically significant. These and other data suggested that one-week treatment produced more benefit than only one hour of bright light. More recently, another one-week study of unmedicated inpatients observed a somewhat larger net advantage of 24.2%, which was likewise statistically significant.[39]  Even a study reporting no statistically significant benefit achieved a 12.2% net advantage in HDRS ratings of the bright-light treated group[40], so that the failure to achieve statistical significance could have been partly due to an insufficient numbers of subjects. These studies of drug-free depressives were consistent in demonstrating advantages of bright light treatment.

A light triple treatment for nonseasonal depression was then tested.[43]  Ironically, this new light treatment was developed by Dr. Neumeister working under Dr. Kasper at the University of Vienna – the same place where Sigmund Freud trained so many years ago. The Vienna psychiatrists treated patients in the hospital with serious nonseasonal depressions who were being treated with antidepressant drugs but had not yet responded. At the start, the doctors in Vienna awakened these patients in the middle of the first night and kept them awake for the rest of that night, while starting bright light treatment and also continuing with antidepressant drug treatment. About 70% of these patients felt dramatically better on the day after they had been awakened early, and they continued to feel better for the following days. About 35% of their depressive symptoms were relieved immediately. It had been previously known in Europe that such awakenings often relieved depression on the day of the early wakening, but the patients usually had relapsed almost completely the next day. Because of this relapse, few doctors in America thought that wake therapy was really very useful. If adding bright light can prevent the relapse, we have a new way to relieve the symptoms of severe depression in one day. There is nothing like it. This excellent response to bright light combined with wake therapy and antidepressants has now been reproduced by other studies at European hospitals.[44]  Our group has also reproduced this effect in a small study of outpatients, who awakened themselves at 2 am in their own homes.[45]

Several studies have shown that bright light may be useful for depressed elderly in nursing homes.[46]

In addition to these studies, there has been one controlled study showing that 10,000 lux produced more benefit than 2,500 lux, when treatment was only 30 min. per day.[47]  This study in effect confirms that bright light is an active treatment. Also, two studies have found shorter hospitalization times needed when depressed patients were in bright rooms than in rooms with darker windows.[48]  A well-designed study showed that bright light was useful for premenstrual depression.[49]

There have been only three early studies with good scientific methodology which failed to confirm significant benefits of light for nonseasonal depression. Two of these studies indeed showed bright light was associated with benefit by every measure, but the statistical evidence was insufficient,[50]  possibly because these studies needed more patients. The other was an unlucky study, in which, by chance, the patients who received bright light had a poorer prognosis at the outset than the patients with whom they were compared.[51]

In summary, there is now extensive evidence that bright light treatment reduces symptoms for both nonseasonal and seasonal depression. For nonseasonal depression, the triple combination of bright light, half-night’s wake therapy, and medication might produce approximately a 35% reduction in symptoms in one week. There is a need for longer-term studies of the triple therapies. The good news is that with the new studies and new developments in light treatment, we may now be quite sure that we can improve the treatment of depression.

34. Canadian Consensus Guidelines for the Treatment of Seasonal Affective Disorder.  Clinical and Academic Publishing, Vancouver, 1999. The full text is available for purchase at Amazon.com

. A summary of the report in PDF form is available at the website for Austrian light manufacturer Instantdaylight